A Stress-Relief Trip To Lonavla

Our team had planned for a trip to Lonavla. I had hesitated to go, as I was not feeling well.I was down with cough and cold. After Hari and Charan left, I was feeling a bit restless and alone. Since we were staying and sharing things together for last one year, It look sometime for me to overcome their separation. They played an eminent role in all my success in last couple of years. Last weekend I was suppose to be alone in home. To avoid this I said OK for Lonavla.
Amit and Anant were the tour managers. As per our plan we have started from Yantra Park by a mini bus at 7 AM. As usual we got the last seat along with Amol. It remembers me the Industrial visit we had in college days.

Oh !! Those were golden days, when we use to start the journey by shouting SALA PULA SALA PULA KUMTAHLAKA. Normally I use to avoid being in a group. My affinity towards groupisim was increased because of the unity we had in our college days. Mootai Annamalai and Maheswaran all use to get themselves involved in 'OOO Poodu'.I feel these kind of small things are playing immense role in bringing people together and creating better relationships. As I was thinning about my olden days we have reached a place in Pune-Mumbai Highway where we had the first stopping for having Vada pav to break our fast. I am planning to write a blog in Vada Pav, the quintessential food for all Mumbaikars. 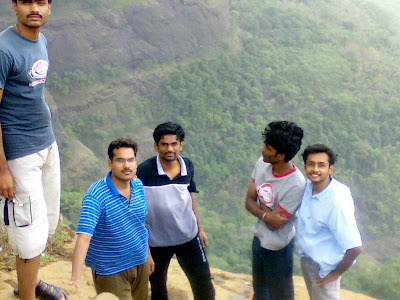 
After the first stop we had an hour of journey and reached Lonavla. As I heard It was really a pleasant place with full of greeneries. The monsoon was started already and it has added a bit of lush to the greens around. Actually Lonavla is lying some 600Feet from ground. As we came out of the bus with preparation for taking bath we saw lot of families, couples and friends were already there for enjoying their weekend. We had to trek for about 500 meters in the small mountain to reach a water falls. We spent couple of hours in the water falls.

From there our tour mangers directed us Tiger point. Its a place about five to six miles from Lonavla. It was like “suicide point” in Kodaikanal. We reached there at 3 PM so it was very windy. We were taking snaps and spend the evening there.

We started our journey back to Mumbai from Tiger point. I have to talk about the immaculate highways between Mumbai and Pune. It was really well planned and constructed. Maintaining road of that much width and lanes in hilly area is really difficult. In the return journey I shared my seat with Saurabh , Mr. Billing in our project. He was discussing about his plan to name his child as "Billing”. I know he has gone crazy after doing billing for last two years.

We reached home by half past eight in the evening. I was feeling free after coming back from the trip. Really having some trips to some remote places now and then will definitely relive stress.
Email ThisBlogThis!Share to TwitterShare to FacebookShare to Pinterest

Karthi... you look little tired in the photo ..that shows you were not well..but gokulan is looking hyperactive :) I saw a photo in orkut somewhere his phot with a coolers too ... Hmm thats good finally you broke the shackles of Locked doors on weekend and sticking to curd rice... but my only feeling is that you did not do this when myself and charan were there...but happy you finally went on a weekend ...Yes I too miss a lot of support from you da.. atleast technology will bind us whereever we are ..

One more thing I forgot to mention was .. I find your Shelfari Book shelf stagnated ...So please dont leave the habit da... Keep Reading its a must...