“I am jubilant, because Federer is jubilant”, these were the words I was murmuring when Federer made a remarkable come back by winning the US open 2008. He has taken his game to a new level of perfection and controlled aggression. After failed to prove his class in the Australian open; out lashed by Nadal in the French Open and unlucky in the epic final at the Wimbledon, Federer also lost his regime of number one spot in ATP tennis ranking after almost four and half years. Because of shear excellence and class he has dominated world tennis for consecutive four years which made media to bestow him the best player ever to play the game.The same media started speculating about the thirteen-time grand slam champion’s down fall so early. Once his unusual calm and uncommon lack of visible frustration has been praised by media and same set of crazy people in the recent past remarked his game as “lack of self-confidence”. But he has given answer to all the question in an unanimous way by winning the US open for the fifth time at Flushing Meadows. 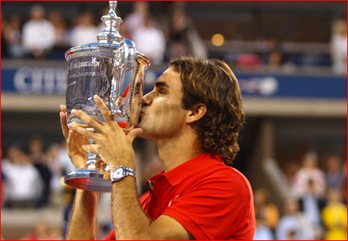 Andy Murray one of strong forehanded emerging player from Scotland was finding difficult to match the 16 time grand slam finalist from Switzerland. Federer started this US Open with average wins, as he progressed further he got his serves stronger and returns accurate. I was able to feel difference in his performance in semifinal against Djokovic. Federer was able to convert all his breakpoint successfully into winners. In the post semifinal press meeting he was asked on, whom would he prefer in the final among Nadal and Murray. He said “I would prefer the trophy”, which showed his desperation to win a grand slam this year. Being a top player for consecutive 230 odd weeks you can't think of an year without any Grand title.

Nadal was lacking his usual agility and endurance in hard court this year. Even though, he won French and Wimbledon he lost in all hard-court tournaments this year. He failed to produce his trademark cross-court return, which earned him vital points in crucial stages of games he played in the past. Murray was too good to beat Nadal in the semis and ready to face Federer in the Final of US open 2008.

Rejuvenated Roger was completely back at his best in final against Murray. He swept opening set by 6 games to 2. Federer game used to be dominated by aces, but contrastingly in the finals he produced only 3 aces but he displayed all-round game by converting 70% of his break point to winners; 70% success by volleying at the nets. He thrust to a 5-0 lead in the final set by breaking the Scot thrice. He was at the peak of his form in the final set producing some unbelievable baseline shots. Finally he won convincingly 6-2, 7-5, 6-2 to become the first man to win US open five times in a row. "It definitely feels great," said Federer afterwards. "This is a very special moment in my career,” he added.

He is one title away from Pete Sampras record of 14 grand slam title. "I'm not going to stop at 13 - that would be terrible!” he said in the after match presentation. Murray said "I had a great tournament but I came up against, in my opinion, the best player ever to play the game today".

Federer would have felt lot better after winning US Open. "I think the French Open loss was brutal, but I got over that one pretty easily, played great on the grass and had a really tough loss at Wimbledon which - you know, I was proud to be part of such a great match, but at the same time it just sort of made me sad not having won that great epic match,” he shared.

Finally he revealed the fact that he was annoyed by media’s comment on his form and performance over the last year. "I mean, I'm a bit disappointed. Sometimes to a point a bit annoyed, because all sorts of crazy people started writing me and trying to reach me, telling me I need some help either mentally or physically. "You're laughing but it's the way it goes. People come out of the closet and think they can start helping me now. It's just a pain.

"For me, this sort of puts them to rest a little bit, and calms down the phones at my parents' a little bit, which I'm happy about”. Federer shines away from the press meet.