Today, I was checking for some new features from Google Services. Own map creation tool embedded with Google Maps allowed me to add my home from Madurai in My map. While searching for options on the left pane, I found an interesting link named Distant Measurement Tool. I clicked over it. It has equipped me with location balloons for measuring distance. I have placed two location balloons in the map and it has printed the distance between the points and a drop down with different units of measurement. I was amused to to see this feature. Also I have tested the tool by measuring distance between my home and nearest ATM centre.

On changing the displayed units, the measured distance will be converted to the new unit selected. I think, considering the variety and range of people, who are accessing the map, they have listed all possible units to measure length. During my college days, I use to jog around Teppakulam couple of times daily. I thought it was awesome, considering the stamina and energy required. Gradually it had extended to long conversation, sometime debate, with my bro regarding Teppakulam’s perimeter. I guessed it was 1.5 Km, he use to deny it irrespective of whatever I said. So It had become a long term ambition to measure the perimeter of Teppakualm. Though we had an option of doing it with odometer of our motorcycle, I was not convinced with its accuracy. Today Google makes it possible with its immaculate image processing algorithm. Finally Google has measured it as 1181.94 m. 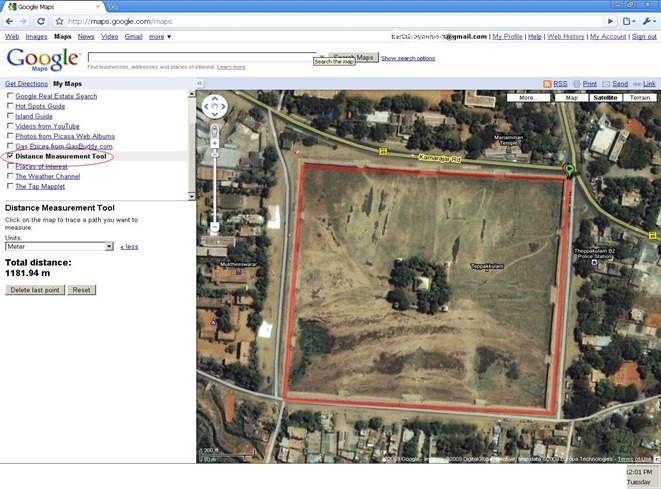 I left you guys to explore the other features available in Google Map.

Buddy.. I told you one side of Teppakulam is 300 meters..then its circumference should be 1200 meters..ur measurement shows 1181 meters... Guess whatever I was telling was true.. At least hereafter give respect to elders' words...I cannot expect to get help from Google everytime....:-)