I am proud to be a passionate lover and follower of the game cricket for long time.Even it has taken a lot of my time in return it has inculcated lot of qualities in me. I started understanding the English conversation after hearing cricket commentary. Even the way I am speaking the language has the influence of commentators I loved to hear. The passion for the game drives me to learn its sensible and exiting parts like pitch preparation and strategy used for controlling a batsman or the planning involved in field setting and using bowlers; testing batsmen patience; even some abusing words in English.

I haven’t got any opportunity to enjoy the game as a spectator among the crowd; I was just enjoying the matches on television. After being to Mumbai I was waiting for an opportunity to get an international match in Mumbai. Last Sunday we got the opportunity to watch a Twenty-Twenty match here in DY Patil Stadium in Nerul.
The match was between Mumbai Indians and Delhi Dare Devils. The effort taken by one of my friend Saurab in arranging tickets for the match has been exceptional. He was in a tight schedule last weekend as he travelled to Indore to attend one of his colleague’s marriage and he travelled back to Pune on Saturday night. He returned to Mumbai the next day morning to give tickets to us. We reached the cricket stadium by half past three in the evening.
There was a big crowd out side the DY Patil Stadium. I was accompanied by Saurabh, Hari, Gokulan and Amol. We were able to see the excitement spread in the ambience. 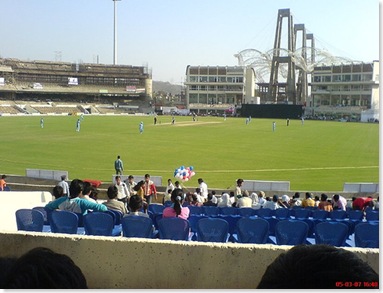 We went inside the stadium. It was really a well designed and constructed stadium, Galleries were remembering me the galleries of Gabba, Brisbane. It certainly looks eccentric from normal Indian grounds. The boundary size has been reduced to amplify the excitement of the game. I thought why the game has deriving its new dimensions by favoring the batsmen and curtailing the bowler’s interest in the game. Before we reached there Delhi won the toss and elected to field. There where two LCD screens for displaying the slow motions after every delivery and ads.

Five minutes before the match was scheduled one Delhi Player with red and black jersey came out. It was really difficult to identify the player in the ground from the gallery. But I identified him. He was Glen McGrath. I was excited to see him; I was shouting … Hey Mcgra… Mcgra !!.He was doing warm up and bowling with short run-up to his mates. I did not believe that I was seeing McGrath bowling. It took some time for me to bring myself back to the ground state. After that Delhi players started jogging inside the ground I was able to identify Asif ,Shewag and Ghambir.Mcgrath bowled the first over. Watching the match live on the filed is not the same as we are watching in the television. Here we are able to see the reaction of batsmen and the action of bowler and pitch of the ball direction of swing of the bat and running between wickets when ball running down the ground with the help of technology. But if you watch the match live, it is very simple. It was like a college cricket match we played. But I saw players like Sanath playing their shots fluently from middle of their bat. Sixes were hit effortlessly and elegantly by players. It is really a batsmen game.Margin of error is very less so bowlers have to be careful about on their line and length. 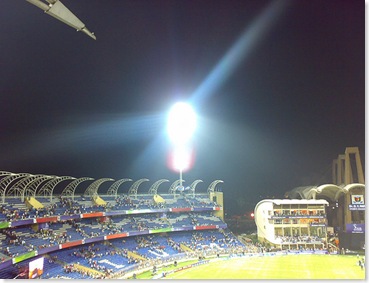 Shaun Pollock has been really agile in the filed and he lead the team in the absence of Sachin. We enjoyed couple of big sixers from Pollock one over point and other over the mid wicket. I was enjoying watching the game it doesn’t matter who player against whom and what was the score.

Delhi came to bat with in-form Ghambir and Shewag. The left hander failed to open his account and went back to pavilion as he was caught in short cover of a tight bowling from Mumbai Indians. Shewag was really awesome in hitting the ball without moving his feet. He played a mammoth six over the covers of Pollock and a one huge six over mid wicket of Sanath.The elegance with which the game has been played in the international level makes the game seems to be played effortlessly.Brutally punishing bowlers and ear tearing music for cheering the batsman and the cheer leaders dancing for every shot played has made this game as a tool for earning money. I guess I would be wonderful to watch a test match in DY Patil stadium,Mumbai.